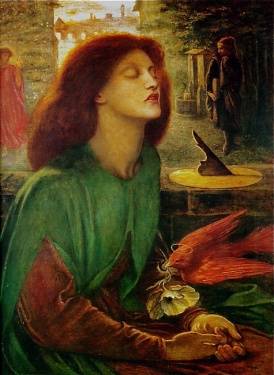 ‘Ego tanquam centrum circuli, cui simili modo se habent circumferentie partes; tu autem non sic,’ says the Lord of Love to Dante in chapter XII of the Vita nuova, after Beatrice has denied him her greeting, the only thing he prizes.

Dante’s whirling mental state in the first third of this enigmatic book is one of the strongest impressions we receive as readers: he is peripheral to the centre of his own experience; the object of his affections is capable of capsizing his whole emotional world with a single gesture.

The trajectory of the Vita nuova will be a journey to the centre, to the centre of his own emotional life, from where he can create his own periphery, stabilize his intellectual and moral interests, then finally construct the complete, organized world view presented to us in the Divina Commedia.

The structural symmetries of the Vita nuova have been noted by many critics: here, in his first book, the young Dante tries to come to terms with his experience of love – the fulminating first encounter with Beatrice when he was nine years old and she eight; their second meeting nine years later, when both were on the threshold of marriage; the fateful denial of her greeting when word had reached Beatrice’s ears that Dante was addressing poems and compliments to another lady, one of the infamous ‘screens’ by which he tried to disguise his love for Beatrice.