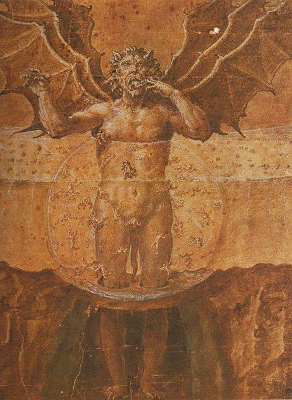 In this talk we explore one of the best-known subjects in literature: Dante’s Divina Commedia.  But how many people really know the work?  And, of those, how many have truly grasped the essential structure of Dante’s cosmos?

The vast majority of Dante’s many illustrators have concentrated on the very solid images of the Inferno: Dante’s journey, led by the Roman poet Virgil, through the various circles of the underworld has produced a plethora of designs, starting from the first editions of the poem in the 14th and 15th centuries, right down to the present day.

There is no doubt that Dante’s universe is intensely visual: the point was memorably made by T.S. Eliot in The Sacred Wood, when he compared Dante to Milton, whose imagination, for Eliot, was essentially auditory.

Milton was guided by the sound of words in the almost symphonic composition of poetic paragraphs, rather than the verbal evocation of visual images, and particularly so in Paradise Lost, by which time the English poet was completely blind.

Dante, by contrast, continually refines his visual sense throughout the Commedia, and this sense reaches its apogee in the Paradiso, the most neglected of the three cantiche that make up the Divina Commedia.

Why is it the most neglected?  Why do twenty-first century readers ‘not bother’ to go up with Dante and his second guide, Beatrice, through the heavens that surround the earth in medieval thinking, right to the Empyrean, the fiery sphere, where Dante, at the very last, is granted the divine vision, the appearance of Godhead?

The answer to this is complex.  One response is that of Umberto Eco, who wrote that, now, we only possess an ‘infernal’ sensibility: our world is attuned to the various ‘codes’ of the Inferno, and by contrast the Purgatorio, where souls are liberated onto the path of salvation, suffers in interest, and the Paradiso finally seems, as Eco put it, ‘flat, boring and pointless’.

This may be how many modern readers react to the Paradiso, but can this view be sustained?  Does the lack of concrete visual correlates to our own infernal experience of the world make the Paradiso a waste of time, an abstract poetic exercise in ‘rhymed theology’, where the game is entirely rigged, and salvation for Dante and the individual Christian soul can be taken for granted?

To answer this, it may be useful to look at some of the ways artists have been inspired to see Dante’s voyage through the three realms of the dead, and the diverse images which, over a wide time span, have emerged from this contemplation of the Dantean universe as presented in the Commedia.